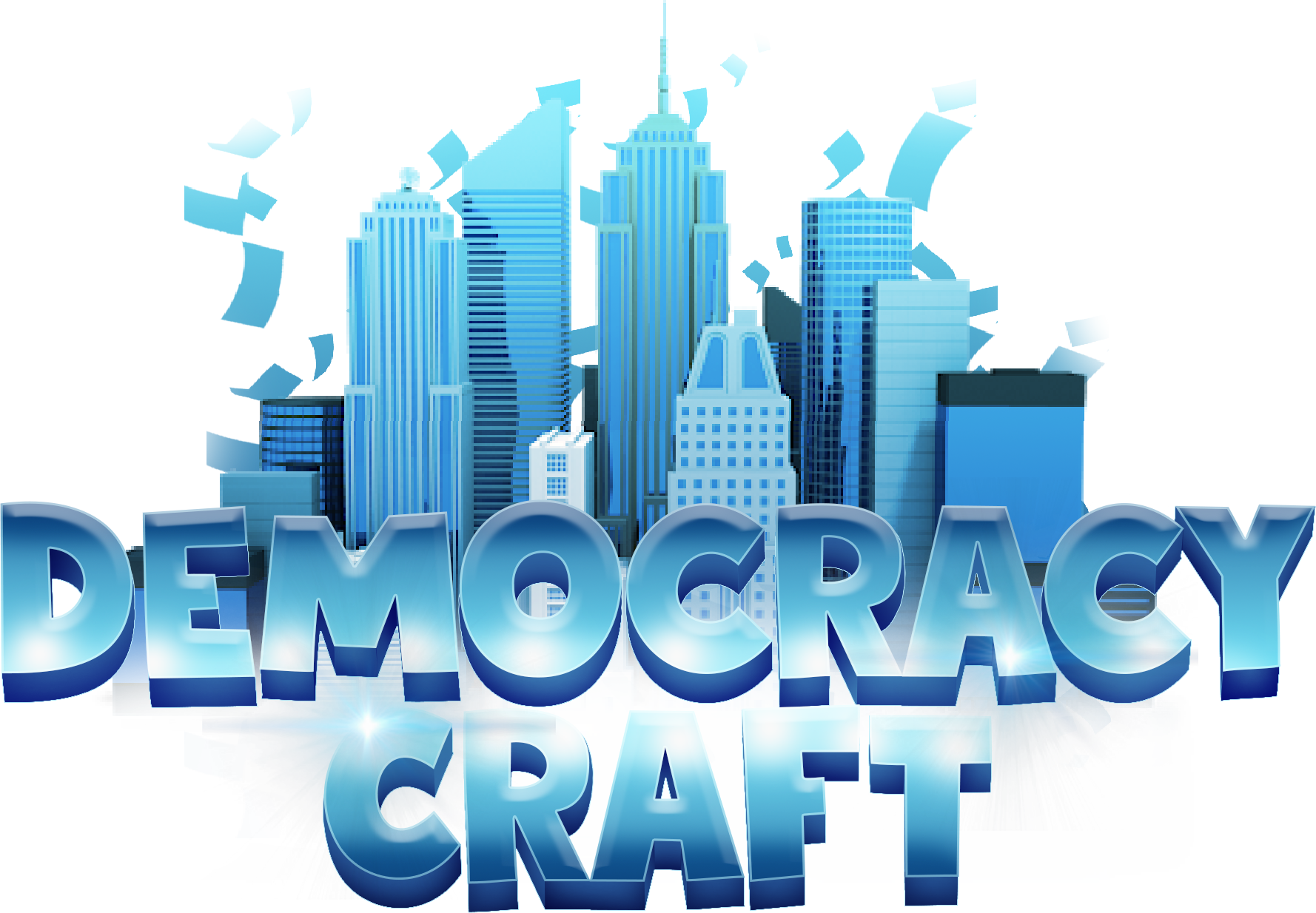 We the players, of DemocracyCraft, in order to form a more perfect form of server, establish this Constitution to guarantee the preservation and protection of Justice, promote the general welfare of our players, and secure the liberty of our participation in the governance of this server. All citizens and the Government of DemocracyCraft will abide by these here set principles to play and unite as one server, DemocracyCraft.

Section One: Structure of Government

The Government of DemocracyCraft is separated into three arms of Government: the Legislative, the Executive, and the Judiciary. It's important to note that the Government and the Server Staff have completely different roles and functions.

The legislative arm of Government takes the form of a player-run Congress. The Congress consists of 7 players, referred to as Congressmen and Congresswomen (This is abbreviated to Rep. for Representative) elected to the Congress for a two month term.

The Congress is responsible for debating, creating, removing, and amending all server laws. The Congress is therefore key in representing the will of the people, allowing every citizen to have either a direct or indirect impact on the governance of the server.


Representatives start the bill creation process in congressional chats, before posting an official Draft Bill to Discord. After 48 Hours the Bill can be posted to Forums for a further 24 hours of consideration and public comment. A bill needs a quorum of 4 Aye votes to pass. Once the Congress passes the bill, it is then sent to the President for their approval.


Additionally, the Congress is responsible for approving and rejecting players nominated by the President for Cabinet and Judicial appointments. Congress also retains the power to dismiss incumbent Secretaries and Judges through a vote of no confidence. In order to pass, the vote of no confidence needs to achieve a 2/3rds majority (5/7 votes).


Responsible for the creation, as well as the modification and removal of all server laws.

The Judicial arm of Government consists of the courts. 3 Judges are to be nominated by the President and approved by the Congress.

The Judges are responsible for presiding over and delivering a non-bias verdict in lawsuits. Where a case is brought before the court against judge, or whenever a judge is unable to fulfil their duties, the Speaker of Congress may deliver a verdict. Judges can also be dismissed should they fail to retain confidence in the Congress.

Lawsuits are made in the Courthouse forum. These lawsuits can be either civil cases (a dispute between two parties, usually seeking compensation) or criminal cases (an appeal against a charge).

Representatives are able to challenge legislation in the court if they feel that it is unconstitutional. In this case, all Judges must deliver a verdict - the majority verdict stands.

The Executive arm of Government is made up of the President and Cabinet. Cabinet is group of advisers to the President, whom collectively administer and guide government decision making.

Secretaries are members of cabinet who each lead a government department or portfolio. It is the Secretaries job to oversee the efficient operations of their department, and to create and amend department policy in conjunction with the Government's direction. They appoint and dismiss employees of their respective departments. Secretaries are nominated by the President and approved by the Congress, continuing to server at the pleasure of the President. A Secretary may also be removed from office should they fail to receive and retain the confidence of the Congress. The President may appoint a Secretary without portfolio to Cabinet, whom does not lead any departments, rather acts as an adviser. The full title a Secretary is "Secretary of Example".
Example: Secretary of Justice, or Justice Secretary, is responsible for the Department of Justice.

The current government departments are:


The Democracycraft Charter of Rights and Freedoms guarantees the rights and freedoms set out in it, subject only to such reasonable limits prescribed by law that are justified in a free and democratic server.

I. The right to participate in, and run for elected office in the DemocracyCraft Congress and Vice Presidency (from the 15th of July 2020 on).

II. The right to vote in Congressional Elections and Vice-Presidential Elections (from the 15th of July 2020 on).

III. The right to vote a Government official out of his or her office,

IV. No citizen is to be made to produce self-incriminating evidence in a court of law.

V. All accused are entitled to appeal a charge made against them by the state.

Section Three: Changes to the Constitution

- A 'Bill: Draft' proposing changes to the constitution is made public.
- A Representative must then start a referendum on forums where citizens, over the course of 5 days, will vote on the proposed amendment.
- A double (Congressional Vote and the Referendum Vote) absolute majority (50%+1) needs to be achieved.
- Presidential Assent.

Any change to the Constitution must carry the short title of "Democracycraft Constitution Amendment Act."[/COLOR]
Last edited by a moderator: Jun 24, 2020